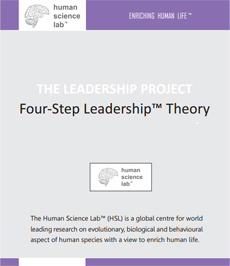 The Four-Step Leadership Theory developed under the Leadership project at Human Science Lab stipulates that the leadership achievement of an individual is proportional to the optimal use of four principal components that makes a leader – motivation, planning, energising and executing.